Tired of paladin oaths that seem to offer only two options of divine fighter or divine healer, turning a blind eye to the many other ways one might serve a deity? Look no further—the Oath of the Even Hand places you in the role of a paladin called to act as a divine judge, acting as a mediator, or, if necessary, an executioner.

In order to download this subclass you must purchase it at or above the minimum price of $2 USD. You will get access to the following files:

Oath of the Even Hand is a 5e paladin subclass that's short (2 pages including the cover) but flavorful and interesting, even as it commits to paladins embracing the very worst aspect of their nature.

Even Hand paladins are at an all-time deficit of chill. Their code requires them to assess whether a crime was committed and then pass judgement more or less immediately, and the class's examples all include stuff that nearly any party of player characters would mob them to prevent.

Of note, Even Handers follow a particular code of law, but that law isn't an ambiguous innate Law. It's whatever legal system or systems they've studied. This nicely sidesteps most of the towering tinderpile of hypothetical circumstances that can incite a player/GM argument over paladins---although it doesn't dodge the matter entirely, and if a legal code has conflicting precedents for an issue, there's plenty of room for a paladin to angst over whether they're doing the right thing.

Crunch-wise, the Even Hand starts a little shaky, with a means for spreading damage out across the party and a way to hit easier / deal double radiant damage. From there, it escalates into being harder to disengage from, and then locking down whole fights by forcing batches of wisdom saves vs. being stuck in place every time an enemy moves.

My gut instinct is that this is a flavorful class, but it benefits *a lot* from a conversation with the GM and party before it's played. As of the time of writing, its 15th level ability locks down monsters within 60 feet, but is triggered by any monster moving at any range. At the same time, its first channel is good for keeping groups of tanks from getting focus-fired, but may mean a net loss if you use it to save the wizard. And more importantly, an Even Hander that's played like the paladins in the examples may be prone to extraordinary conflict with the group.

I think if used to play a meek law nerd or a judge who believes that the law requires interpretation, provided the GM and the rest of the party are on board, this is a really cool subclass, and I'd encourage picking it up. If used to play a rigid, high-handed judge who unilaterally brings the disproportionate hammer of justice down on whatever is immediately in front of them, this class spikes the potential for party-infighting through the roof, and should probably only be picked if that's something the group expressly wants.

-Page 2, Stand Trial, "up to three creatures within 60 feet of you you can see make a Wisdom saving throw."

Hello! This is such an interesting subclass! I love the tenets (though gods do they seem difficult to uphold) and truly exemplify what an avatar of justice should be.

I really like the choice of spells as well, and Avatar of the Law is extremely powerful (as it should be!) and brings a combination of combat/utility that I find cool, because it gives a chance to use this power outside combat. Stand Trial seems like it might be a bit too powerful if your PCs have ranged spells because they cannot save at all apart from the first time, and ten rounds will kill practically everything. Maybe that should be reconsidered.

I'm so glad you liked it!! Thank you so much for commenting on both of these, it makes me so happy that you enjoy them. 😊 Good point about Stand Trial--it may be too strong. 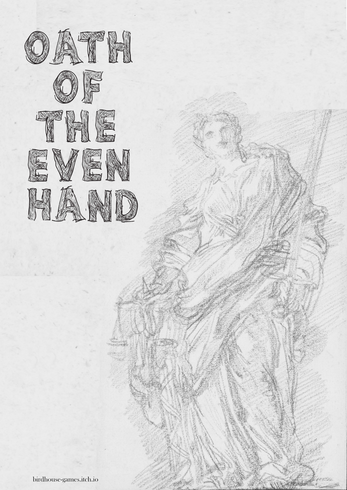 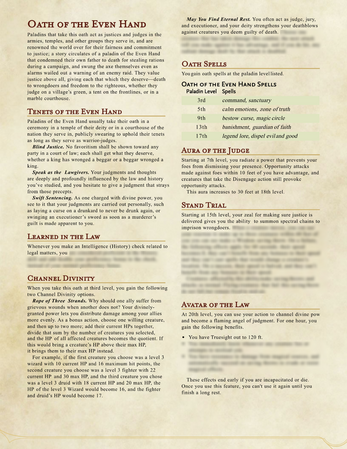