Want a way to hurt people with plants that isn’t whacking someone with an oaken quarterstaff? Want a subtle and engaging playstyle that rewards research and effort?

Poison for Beginners is the book for you—with 26 pages containing 20 truly unique and odd poisons, system agnostic rules for foraging, refining, and purchasing poison (along with a couple Powered by the Apocalypse moves), and lovely black and white illustrations, it's a must-read for anyone that's interested in plants that can defend themselves. It also includes examples of play for ease of use, and suggestions for use in a D20 system, such as D&D 5E.

Also available as a physical copy! Pay $5 or more when purchasing the game and select the Physical Zine reward, then input your address as prompted. $5 is for U.S. domestic shipping only—e-mail me at lwilson@gmail.com if you live outside that area for a rate.

If you have questions or comments, feel free to ask me on Twitter @lwilsonbird or e-mail me at lwilson@gmail.com .

In order to download this supplement you must purchase it at or above the minimum price of $5 USD. You will get access to the following files:

Support this supplement at or above a special price point to receive something exclusive.

A physical copy of Poison for Beginners, shipping included. 5.00 is for continental U.S. only—otherwise, e-mail me at  lwilsonohio@gmail.com for rates.

If you're struggling with money during the pandemic or can't afford a copy for any other reason, grab a copy here—no questions, no judgment. I want everyone to be able to play this game!

For every copy purchased, and for every $5 in tips, another community copy will be added to this pool.

Poison For Beginners is a 14 page fantasy reference on natural poisons. It's broadly intended for PbtA and d20 systems, but it contains some information that is generally useful all around for writers and roleplayers---although it's definitely not a scientific reference, and you absolutely want to double-check all of its information before using it as anything other than a cool game mechanic.

Overall, Poison has a very clear, readable layout and a cool Victorian handbook vibe, and its writing is super strong. There's also comprehensive, useful information on a variety of naturally growing poisons that can be found in (I think) primarily northern climates.

Not everything has an illustration, so I wouldn't treat this as a handbook for going out and ID-ing stuff in the wild (although just knowing that False Morels exist can potentially save your life if you're idly mushroom hunting---btw, on that note, never consume anything you can't 100% beyond-all-possible-doubt identify.)

Also, not everything has all possible names listed, so it's possible you might know a thing by a term that isn't in the pdf.

Also some poisons have been fantasticized, for example the Calabar Bean, which in real life just kills you instead of mildly punishing you for lying, or the Destroying Angel, which the game links to an actual destroying angel, or the False Morel, which again just kills you irl instead of making people not believe you.

Overall, it felt a little strange to me that the book focused so hard on taking real herbs and then adding fantasy effects to them, when it could have just as easily have come up with fantasy herbs and had a little more leeway to assign traits to them, but at the same time it's a cool toolkit and has good information about various ways poison can be prepared, how settings handle the existence of poison, and some examples of how to GM situations involving poisons.

I'm liking it and it is very easy to use!!

Could you please add a single page version? I would like to print it out in booklet format.

Hello! I'm so glad you're enjoying it. If you'd like it as a physical copy, you can e-mail me your address at lwilsonohio@gmail.com and I can mail you a pre-printed booklet.

Hi! I'm from Europe, so that's going to be extremely expensive, that's why I wanted to print it out myself.

Ah, okay! Do you have access to a duplex /double-sided printer?

Yes, what I usually do to print a zine is arrange the pages into booklet format (using pdfbook), so that when I print it out I just have to fold it and stable it, and it's ready to go. If a sheet has two pages in it, it is impossible.

I have a file in booklet format all ready to go! E-mail me and I'll reply with it. 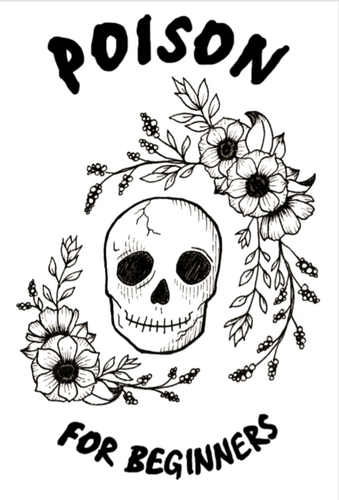 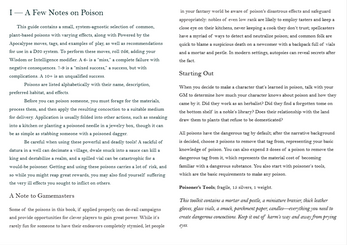 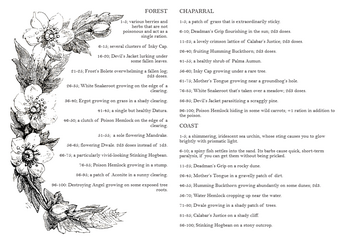 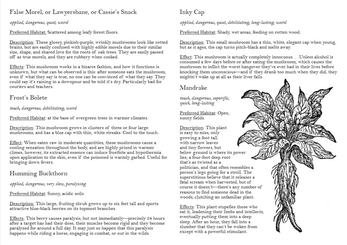 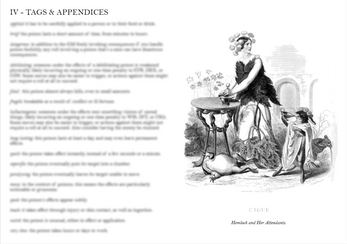